Hurrah, we have a release date for songs Vic recorded with Catalan group Mates Mates when he was in Vic last November for Famelic Records, Barcelona. The songs are Castaslasnas; (Oh Alright)Go On Then and Whip Rules, the download will be available from 15th January 2013 and the 7" single is released on 1st February 2013. More info on how to get these to follow. https://www.facebook.com/famelic?ref=ts&fref=ts

This is where everyone (one of the many one off line ups of 2011 with Trigger returning on bass, Mark Braby on drums and Yusuf B'layachi moving to guitar for the trip- VEY lucky to have such a talented and versatile group of musicians to turn to) stayed in Vic, one of Vic and the gnu's favourite hotels, a truly unique place, very welcoming (especially from Mistu, the VERY friendly and loveable resident Jack Russell)and definitely recommended if you visit Vic, which is also highly recommended. It is a very piggy place and related products abound, so if you're not keen on meat, like the gnu,there are also lots of peppers, tomatoes and pasta and a local speciality- a very, very thick hot chocolate, for dunking in to and scooping out with the local speciality biscuit. 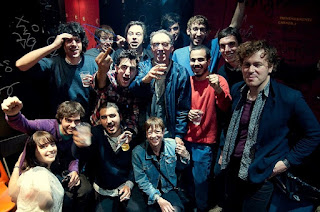 This is the whole gang-the Sect lot, the Vic lot and the Barcelona lot after the last gig in Barcelona, Vic was staying on to record and the rest were returning home the next day. 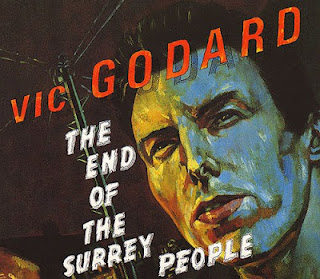 RELEASE NEWS #2 Delight all round that 2 songs from the 4 so far recorded will be released as a 7" single on Aed records in January 2013-keep an eye out for news of the date and I will find out if I can show off Andrew Shaw's brilliant cover. The two numbers are Caught in Midstream and You Bring Out The Demon In Me, recorded at West Heath Studios, produced by Edwyn Collins with Kevin Younger, Mark Braby, Paul Cook, Paul Myers,Simon Rivers and Vic. Edwyn has a new album out Spring 2013, Understated and will be touring 'across the land' Also to come on Aed early 2013 is the re-release of End of the Surrey People On the Gnu Inc front Live and Rare Vol 2 has been very positively received, Vol 3 will be even better. GI has also done a very limited run of 50 epcds for Vic.ism- 'Vic Godard & The Sexual Objects Live at Love's Rebellious Joy August 2011. 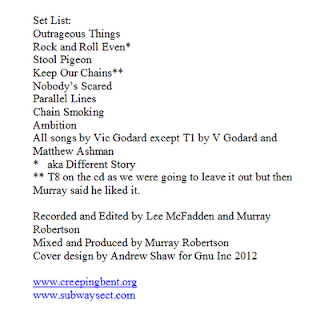 Email ThisBlogThis!Share to TwitterShare to FacebookShare to Pinterest
Gearing up for Vic.ism and it's all systems go. Starting off with the Marc Riley session on Thursday 29th: Then it's a race to Gulliver's after, Vic and the Sobs are on about 10ish ish. The Sect's own multi talented Mark Braby will be introducing us to his new band Thee Potato 4 with the Sob's Ian Holford on drums and local group Greetings complete the bill. The gnu will be bringing a very limited amount of limited edition merch, including Vic.ism T Shirts, Vic.ism limited edition epcd of Vic and the Sobs live at Love's Rebellious Joy 29/08/2011 and some Live and Rares. 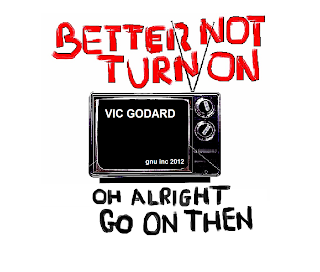 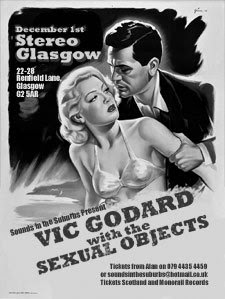 Can there be too much Vic.ism? Will I be vic.ismed out by next Monday? Course Not!!! A list of Vic's Desert island Discs for Stupified Blog Spot http://theworldsamess.blogspot.co.uk/2012/11/stupefied-vic-godard-playlist.html
Posted by Unknown at 06:27 1 comment: 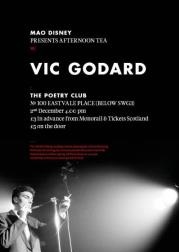 Vic will be talking, reading Camus, Jazz and performing @
The Poetry Club, Eastvale Place (below SWG3).

We'll also be serving tea, scones & sandwiches plus a bus with
limited places will be setting off from Mono at 3pm on the day to ferry
you there & back if need.

4pm start, £3 in advance from Tickets Scotland & Monorail, £5 on the door. 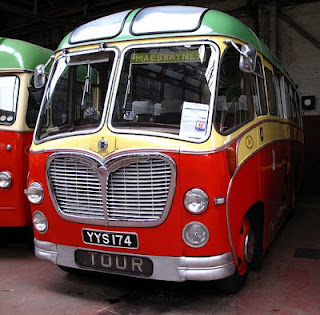 Transport from Mono to the Poetry Club and from PC to the Glasgow Film Theatre. Vic will be the conductor for the 2nd leg.
Posted by Unknown at 03:44 No comments:

Car hired, gear loaded and off we went to rendezvous with Mark, Kev and Yusuf at North Acton. All aboard key in ignition then...... nothing. Oh No!!! Phoned hire people, singularly unhelpful, phoned  AA and waited. Two hours later we are thankfully on our way but with a dodgy connection on the starter motor.