The London Mayoral election, all over now, in my opinion a bit of a politically irrelevant vanity post, an excuse to add yet another dining car to the Expenses Express.

Smug Jobby by Jock Scot
My job is very important
My job pays exceedingly well
And as for the poor and their problems
Well they can all go to hell.

"Beauforts red sparkling eyes blab his hearts malice, and Suffolks cloudy brew his stormy hate" Henry lV Part II William Shakespeare
There wasn't much to choose between the two front runners,they were less of a lessness, one born very rich, one not (although on an MPs starting salary of £70,000+, more than most of us earns), one a Brexit bonehead, the winner a a cagey Innit (and New Labour, already attacking Mr Corbyn's leadership), neither were offering anything that was likely to improve the lives of the Londoners who work and live (for now) in London. Paying an average £200,000+  for 25-33% of a flat under shared ownership, paying rent on the remaining 66-75% plus 100% of all service charges including major works and paying a mortgage for 25 years to possibly end up owning the same 25-33% you started with and still liable for the rent on the remainder, does NOT equate to 'Affordable Housing'. On the other hand I'm sure that both would have, and Mr Khan will, roll out the red carpet a little further for the non tax paying non domicile billiogarchs that blight and feed off our capital city and cater further to their housing 'needs'.
http://www.bbc.co.uk/news/uk-england-london-36077823 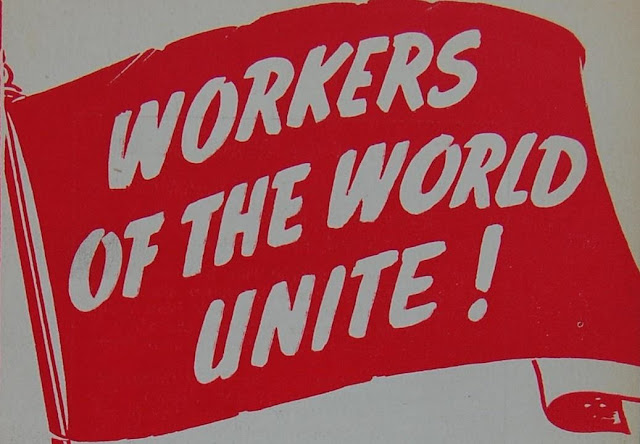 Definitions of AVOID - keep away from or stop oneself from doing (something),  refrain from, bypass, dodge, eschew, escape, duck (out of), fight shy of, shirk from, EVADE, steer clear of, sidestep, circumvent. Definitions of EVADE - get away from, AVOID, escape, to get around, shirk, or dodge. Synonyms for EVADE -  AVOID, escape, dodge, shun, elude, eschew, steer clear of, sidestep, circumvent, duck, shirk
A sentence containing both words might be: 'It would of course be wildly inappropriate and unfair if one was to confuse or compare those who quite legally pay accountants vast sums of money to avoid paying their taxes with the corrupt miscreants and criminals who do the same to evade paying them.

Oh What A Night!
THANK YOU Shelley and Phil for putting on a joyously unforgettable night in Brighton. Lots and lots of luvverly people squeezed in to the Green Door Store for this Spinningchilli Springs/Sect Seaside very special Special. A night and a half squeezed in to a few hours, great to catch up with lots of old friends and make new ones, stonkers of sets from the Bitter Springs and Vic & Subway Sect, a stand out night. Special thank you to the lovely David for the wine and chocolates (chocs arrived safely). V&Gxx
Brilliant 'Born To Be A Rebel' with Simon Rivers on backing vocals filmed by Tim Melia -

Lucky with our friends in so many ways, here is a selection of some of the FAB photographs of Vic and Subway Sect, Simon Rivers and The Bitter Springs, Vic and The Springs and Simon with Vic and Subway Sect the night courtesy of Nigel Bailey, Peter Tainsh, Phil G, 'Jane Barnes', Steve Clements, Vincent Arquillière.
More of Peter's lovely photographs of Vic, Sect & Springs at the GDS here: https://www.facebook.com/peter.tainsh.7/media_set?set=a.10153729793388937.1073741876.564378936&type=3


This was such a contrast to what occurred the next night in London W10 which was a total fiasco and Vic didn't get to play. Not long after 6pm when it was obvious the 3.30pm sound check wasn't going to happen at all apart from no back line the first group Youth were on at 6pm, Vic went for a wander. On his return, along with a large group of understandably hacked off wristband wearers he discovered he couldn't get in to the venue (opened at 6pm) because no one mentioned in advance that specific photo ID was needed by punters and the groups (because of previous trouble there) to get in. By the time Vic eventually got back in (one of the promoters turned up and got him in and then vanished again) it was past the Sect's stage time and the next group up, who had the back line Vic was going to borrow, had to go on as they had trains to catch and obviously were taking their b/line home with them. By this time this was moot as the Sect also had trains to catch, the organisers did not seem to have factored in that it was a Bank Holiday Sunday and the underground/trains finished early. There was no point wasting any more time hanging around (the last act The Woodentops, also having been refused entry) so Vic and the others left the scene, shortly after the gig was shut down. I have never come across such a total lack of organisation before, or lack of respect shown for both the groups and punters alike, there was no one from the promoters on site (or responding to phone calls, etc) to manage the situation or even to try and alleviate it and as far as I'm concerned the buck stops with the organisers, they hired the venue, the security team were doing their job and single handedly dealing with a hostile situation that was not of their making (I'm told police were there at one point).  Apart from this prior to the event Vic had been added to another event without asking him or even telling him and when he said he was not up for it did they take his name off the poster? No. However what I found actually distasteful and crass was the organisers leaving Jock Scot's name on a poster following his death and still there on their social media sites up to the event, a week after his funeral. Shame on you PL. 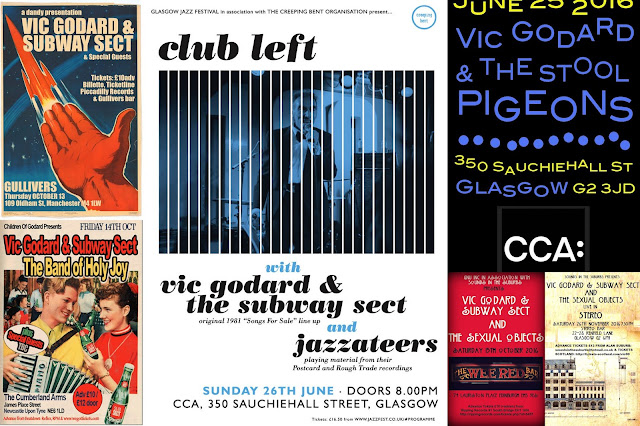 Next Month me and Vic will set off on our first Scottish adventure of 2016, heading to Glasgow for two VERY special Creeping Bent/Sounds in the Suburbs/Glasgow Jazz Festival nights at the CCA Glasgow. 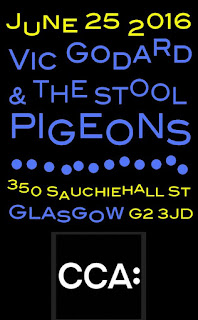 Vic is getting back again with The Subway Sect, Chris Bostock, Rob Marche, Sean McLusky and delighted to have Pete Saunders on board on the keys. If you fancy a night of Cool Bop and Swing then join Vic & The Subway Sect and very special guests The The Jazzateers at the CCA. Tickets £15 from CCA:
http://www.jazzfest.co.uk/#programme
Video courtesy of Rev Jock, November 2014 at a sold out 100 Club London. 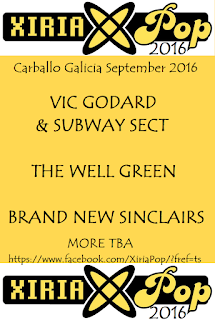 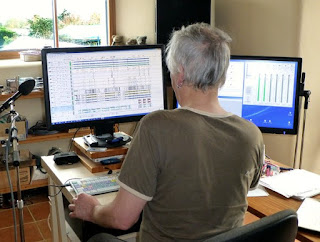 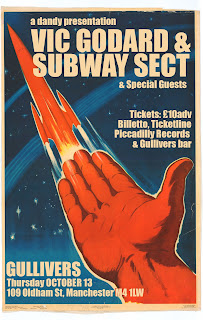 and on line at billetto:  https://billetto.co.uk/en/events/vic-godard-subway-sect-1e31f4


Van McCoy - Do The Hustle

Possible gnu inc Christmas do on the cards....Watch this space! Stop Press......CONFIRMED 9th December...Vic & The Gnu's Christmas Do at The Water Rats Kings Cross London.....Details to Follow.


Some time in late 2015..... Nightfall and the gnus were gathered at the drinking hole, a gentle breeze wafted in from the south filling the gnus' nostrils with an intoxicating plethora of mingling whiffs, so at first it was hard to distinguish which particular whiff it was that suddenly made the fur on the back of the gnus' necks stand on end and set the alarm bells ringing 'Nuisance Alert'. It was with a shudder that went from horn to hoof that the gnus realised it was the malodorous reek of stale cigar smoke drifting closer and closer that presaged the return of an infectious infestation thought to have been eradicated from the herd some four years earlier...........


As it turned out the incident passed without incident (sic) just a bête noire moment - COURTESY = RESPECT, the inverse of which is obvious.

One of the things I personally think is piss poor very bad  manners and showing a total lack of respect to the person or persons concerned is to pass on phone numbers without asking first. The next person that does it to me or mine and I'm sending the boys round. In other words:

You Can Ring My Bell (But ONLY if I've given the OK!)

If you missed the absolutely brilliant   'Little Richard In His Own Words' on BBC 6 Music (the man is ) I think there is still time to have a listen, it will make your day, one of the most entertaining radio shows I've ever listened to! WOOP
http://bbc.in/22bwLaF

The Dave and Lee Travesty Show #15, hosted by Dave Smith and Lee McFadden, on Croydon Radio. Vic is guesting on this, I think he talked so much so he could keep the obscure punk tracks to a minimum, very entertaining and informative. Nearly forgot, first airplay for a 1979 Northern Soul demo 'Fortunes Come' with Vic, Myers and Rob Green plus 'Dead Dreamy' from the forthcoming gnu inc 7 ". http://www.croydonradio.com/podcast/all_shows.php?ID=2952b587-7eb1-8d0e-0b2e-dafb26d100ff


Alan's radio show with much the same music is broadcast every Wednesday 6-8pm at wwww.en5radio.com

Vic's friend Leka Mladenovic has a new exhibition just opened in Belgrade, on until the end of September
"Панк портрети династије Обреновић" or "Punk Portraits of Dynasty Obrenović".
https://www.facebook.com/events/281380508870022/permalink/283743358633737/
Leka talks about the exhibition on RTS (yes, you do need to understand Serbian!):
http://www.rts.rs/page/radio/sr/story/23/radio-beograd-1/2321840/.html


Most of Jock's poems that I've sprinkled here and there are from 'Where Is My Heroine' Poems of Jock Scot, first published by Castle Star 1992, the latest (sold out) limited edition published in 2016 in Jock's memory (proceeds to his family). I can't find any copies of any editions for sale so I think it's time for another edition Algernon.

From time to time Vic is asked to do a bit of video for this and that, we don't have smart phones and have an aversion to the webcam so when this arises it means filming with the camcorder. This is never as straightforward as you might think and I have folders of out takes, to which I have recently added the below, Take 1(of 18!) of a plug for Neu! Reekie! #UntitledTwo.

Gnu Inc CD single #3 Wayward Biro, a few of these limited edition CDs will be available to buy after the gigs or you could wait and buy the box set at the end of the year.

I LOVE the new Pet Shop Boys single, returning to their 90's roots with this particularly wistful and melancholic dance song - The Pop Kids.

The Nightingales May Tour starts on 12th May with Spinningchilli in Brighton
http://www.wegottickets.com/event/343486 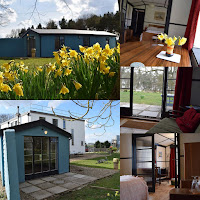 Planning a trip to Norfolk?
http://controltowerstays.com
The Control Tower Walsingham could be the place for you. The dog friendly Stirling Suite is now open and available to book.
http://www.sawdays.co.uk/britain/england/norfolk/the-control-tower#search_type=placeName&search_text=control%20tower%20b+%20b%20walsingham&
/ 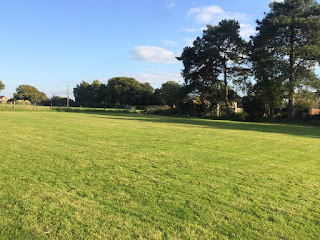 Or if you fancy a camping break the gentle old fashioned 'Famous Five' way (plus trimmings!) with a camp fire, Timmy by your side (dogs welcome accompanied by considerate owners) and lashings of ginger beer (or whatever your tipple may be as The Foresters Arms a country pub with award-winning food and selection of real ales is conveniently very close by) and all within in the stunning surroundings of the New Forest, then your luck is in as our friends Viv and Ian new family run campsite 'Harry's Field' opens Bank Holiday Weekend between 27th-30th May and are taking bookings now. (PS There are all the modern conveniences of flushing loos and hot showers) 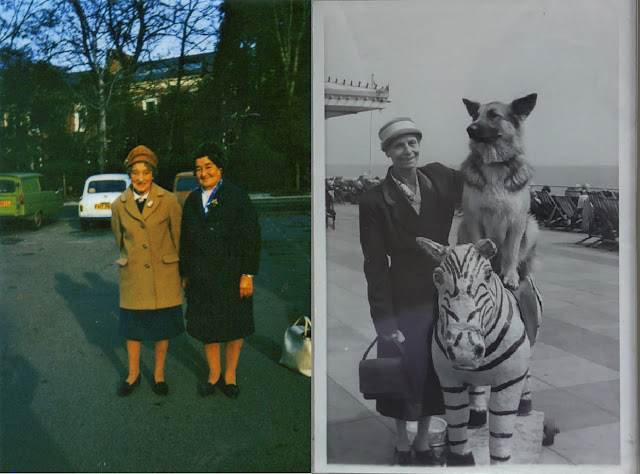 Vic and I went to the Epsom Races on the spur a couple of weeks ago, the Spring meeting. I was in a devil may care frame of mind and bet and lost on all except the last race and no I didn't bet and win, I didn't have a bet at all. Vic on the other hand, unusually, only had the one bet and won. Video of the last furlong of one of the races I lost in, you can just about hear my optimistic encouragements fading away as I realise it's another lost cause. 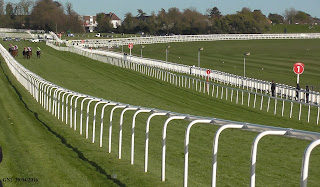 Racing was one of the interests that Vic and Jock Scot shared and true to form (excuse the pun), for his funeral Jock requested that people make a donation to the Injured Jockeys Fund instead of sending flowers.
http://www.injuredjockeys.co.uk/