Gertie & the Gnu Got Gnews

The songs are from the renamed 1979 Whenever ( 1979 Now first mooted at the start of 2011 when Vic asked Paul Myers if he would be up for it) but Vic and the band keep getting sidetracked by other things and it's become a bit of a legend now at Sect HQ (stop press: they are back in the studio this month). The tracks were recorded  at West Heath Studios London and produced by Edwyn Collins. Vic's collaborations with Edwyn go back to the 1990's when he  produced three albums for Vic - End of the Surrey People in 1993, and .Long term Side Effects and In Trouble Again in 1998.(you can also catch Vic's unmistakeable backing vocal at the end of A Girl Like You)
Below is You Bring Out The Demon In Me from Subway Sect. 6Music Session with Marc Riley29/11/2012
Images from Andrew Shaw. More of the session on the main website: http://www.vicgodard.co.uk/

If your record shop is part of the scheme you can contact RSD here for general info: http://www.recordstoreday.co.uk/contact.aspx
We'll be keeping up with which shops order the single so we can let people know where to go on RSD and in the following 4 weeks of exclusivity and obviously RSD are keen to ensure the availability of their releases.
AND Vic will be Katrina and Stephen's guest at Mono Glasgow on RSD (20th April) itself,
spinning a few discs, doing a few VU numbers with some friends (Davy Henderson, Douglas McIntyre and Simon Smeeton so far), probably some witty banter on the cards and generally stirring it up.
https://www.facebook.com/stevenmcseveney2?fref=ts

The 'laid back', some might say haphazard, approach to organising the musical year in 2013 seems to be meeting with some unexpected successes (above) and resulting in Vic stepping outside his comfort zone (sorry got outsourced whilst working in local government and was fed a diet of jargon). On Tuesday 26th Feb DJ Vic ll made his debut for Idle Fret at the Blue Orchids, Onions, Dearbhla Minogue and the Partisans plus dj Artrocker gig at the Social W1. Fielding an eclectic mix of  tracks for his three sessions including reggae,ragga,'90's hip hop, R&B, northern soul, soul, Crystal Waters and the Sexual Objects and it seemed to go down well. (gnu's thinking of exploiting this new found talent and advertising his services for weddings, birthdays,bar mitzvas etc)

Next up on Saturday (morning) 23rd March Vic's doing an interview with Victoria Yeulet,and session with Mark, Kevin & Yusuf , on Resonance FM 104.4 http://resonancefm.com/schedule

Heralding in the Easter weekend on Friday 29th March is Subway Sect's FIRST GIG OF 2013
Symptomatic Presents Vic Godard and Subway Sect @ The Water Rats London W1 with the Jelly Fiends on board should be a cracker. ( blimey, last time the 5 piece played live was 09/11/2012 at Mr AP's memorable birthday party on the boat, an enjoyable time was had by all.) Gnu's done some great exclusive merch for the night and as it's Easter there's a wee sweet treat in store for all advance ticket holders.

Just one week later the Sect are back in Brighton for Spinning Chilli Presents @ the Green Door Store with the legendary Asbo Derek. https://www.facebook.com/events/301145696658640/

A similar selection of exclusive merch will be available at all the Sect gigs this year but keeping it under wraps at the moment.
As well as the RSD visit to Glasgow on 20th April Vic will be back in June to do a set of jazz classics accompanied by Andy Alston, Mick Slaven and James Kirk at The Jazzateers gig for the Glasgow Jazz Festival, waiting to confirm it is on Friday 28th June. Vic will also be doing a gig in Edinburgh on the 29th, details to be confirmed.  Back north on 17th May for Subway Sect @ New Continental Preston, brilliant venue that covers pretty much every area of the arts and more :http://www.newcontinental.net/whats-on/event/vic-godard-subway-sect-plus-special-guests and then on 1st June the Sect are delighted to be back at the Brudenell Social Leeds with the excellent Expelaires and Cyanide Pills also on the bill:.
http://www.brudenellsocialclub.co.uk/Event/Details/855

Also fitting in a trip to York races in June: http://www.yorkracecourse.co.uk/racing/fixtures/june-meeting_42

There are not likely to be as many Subway Sect gigs this year as in the last two so catch them when you can. (Vic and the Gnu are thinking of  doing a xmas event themselves 'the Gnu's Big Night Out' but still working on the format, venue and line up.)
Nothing confirmed yet for July/September and October but Vic is planning a visit to to Barcelona in August to sing a few songs with Mates Mates at Festigobal, part of Barcelona's oldest fiesta
https://www.facebook.com/pages/MATES-MATES/199378890103020?ref=ts&id=199378890103020&sk=info and in November he is back in Scotland singing with the Sexual Objects for the Sounds in The Suburbs gigs at CCA Glasgow(23rd) and the Voodoo Rooms(22nd) in Edinburgh. Also on the cards is a trip to Hamburg with the Sobs.
Apart from the Mates Mates and Caught in Midstream 7" releases the gnu is currently working with Murray Robertson on the cd Live in Stereo Too- Vic and the Sobs live in Stereo 1st December 2012

g still working on the cover. A taster video from the night courtesy of Lee McFadden and Tracey Holloway, filmed by Tracey Holloway.
Also thinking about: re-issuing What's the Matter Boy with a couple of extra live tracks, doing Live and Rare Vol 3 or perhaps instead putting out the 1978 gig at the Gibus Paris in it's entirety, it being the nearest thing to the 'lost album'. Vic's working on some new songs and gnu inc wants to do a 7" before the end of the year. 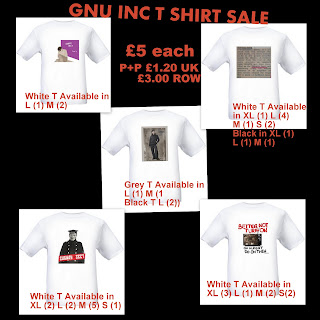