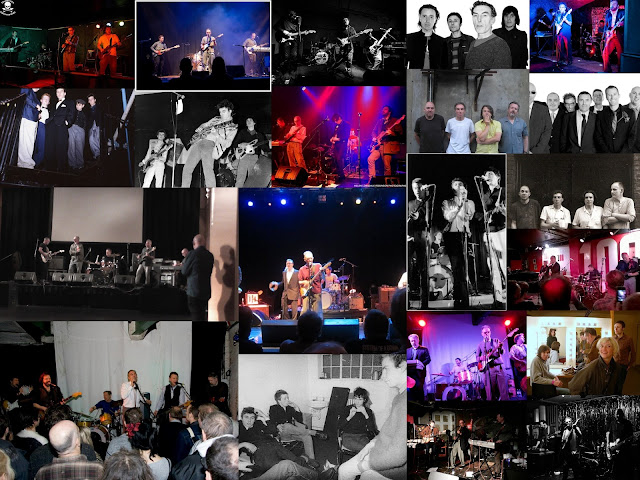 Subway Sect debuted alongside their contemporaries The Clash and Sex Pistols in 1976. With Rob Symmons on guitar, Paul Myers on Bass and Paul Packham on drums, their raw sound and sense of melody set them apart from the punk acts that joined the conveyor belt that year.
Vic Godard - vocals (and later guitar)
Rob Symmons - guitar
Paul Myers - Bass
Paul Packam - Drums
Paul Packam left and Mark Laff joined on drums, then he left at the end of the White Riot Tour and Bob Ward joined up. For a short spell in late 1978 Colin Scott replaced Myers on bass, Johnny Britton replaced Rob on guitar and Steve Spartan joined on keyboard. A one off Subway sect live line up played at the Music Machine in 1980 (Northern Soul set) with Vic on vocals and guitar, Paul Myers on bass, Bob Ward on drums, the Turkish man on keyboard and Rob Green on backing vocals/tambourine.
By the time the first album ‘What’s The Matter Boy?’ was released, the line up had changed five times and the influence of The Black Arabs and the Chimes brothers on WTMB produced a poppier, soulful sound.

Early 1980's - Change in direction when Vic got together with musicians whose talents allowed him to experiment with jazz, swing and Motown and Vic Godard and The Subway Sect were born(‘Songs for Sale’)
Chris Bostock - bass
Dave Collard – keyboard
Rob Marche - guitar
Sean McLusky – drums
What they went on to do: http://joboxers.net/

Vic played solo for the next several years with many different groups and line ups (see end of page).

Vic Godard & Subway Sect Live Return.
1997ish-2005ish
Long service medals due for the next incarnation of the live Subway Sect line up emerging in the 1990's and continuing in to the 2000's. It was when Vic first teamed up with Simon Rivers and The Bitter Springs –
Simon - guitar/backing vocals
Paul 'the Wiz' Baker - keyboards
Paul McGrath – drums
Dan Ashkenazy - bass
Nick Brown – guitar
Phil Martin - violin/tambourine .
The collaborations continue including Simon being a regular SG on Vic & The Sect's releases.
https://www.facebook.com/TheBitterSprings?ref=ts&fref=ts
Added to the mix on 24/04/1999 - Katy from The Secret Goldfish was backing vocalist on all songs in the Vic / Sect set at the Belle and Sebastian curated Bowlie Weekender that ATP organised at Camber Sands.
(More importantly, the Sect team (which consisted of Douglas MacIntyre and some TFC fans) beat Teenage Fanclub in the 5 a side football tournament prior to the event starting!)

2006/2007
Vic formed a four piece Subway Sect to record and promote 1978 NOW! (2007 Overground). A return to the fold for Mark Laff on drums, together with Leigh Curtis on guitar and Paul 'Trigger' Williams on bass.
EXCEPT for a memorable (!!) few minutes at the end of a gig in December 2007 – Vic, Leigh and Trigger return to the stage for an encore however Mark was showing a marked reluctance to join them (possibly Sect lag!) so Lee McFadden valiantly volunteered for action and had just settled on to the stool when Mark decided after all to return for the last song! So Lee was very nearly another Unexpected Very Special Guest Sect drummer.

2008/2009 - Ch ch changes
By the beginning of 2008 Mark Laff had left (again!) for pastures new and Gary Ainge (Felt/Gokart Mozart) signed up (until retiring injured in 2010, see below).
Mark Braby* also joined up on bass guitar following Trigger's departure to seek his fortune as a cabbie.
Kevin Younger* was another recruit,on keyboard and when Leigh Curtis left in May to pursue other things Kevin took over guitar and keyboard duties. The line up then stayed the same until the end of 2009.
EXCEPT for one gig early in the year in Wolverhampton that Gary couldn't do so Mark moved to drums, Leigh Curtis on guitar, Kevin on keyboard and Trigger came back to play bass.
AND in May at The Plough Walthamstow there was a very Unexpected Very Special Guest performance by Lee McFadden when he unexpectedly joined the Sect for the encore on guitar and backing vocals, ‘Ambition’ and ‘Americana On Fire’.

2010
Gary Ainge left due to his ongoing back problems and Mark moved on to drums and The Bitter Springs Dan Ashkenazy agreed to a stint as the Sect's V Special Guest bass guitarist, Kevin Younger on keyboards/guitar and this line up stayed the same EXCEPT for the opening song at St Aloysius gig London in March – Vic, Dan & Kevin took to the stage, however no sign of Mark B, no response to the shout out so Dave Morgan (Vic’s v lucky with who he gets coming to gigs!) stepped in to the breach and did a sterling job on Pay The Rate, after which Mark, having been located, took over on the sticks.
And except for 24 April 2010 - Vic once more fronted The Bitter Springs' version of Subway Sect for a special reunion at The Wilmington Arms.

2011
March, a fond farewell to Dan A, whose temporary Sect stint ended and in April,welcome aboard Yusuf B'Layachi on bass. Otherwise line up remained unchanged for the rest of the year ('course it did....not!).
So up to the end of March
Vic -vocals/guitar
Dan Ashkenazy - bass guitar
Kevin Younger - keyboard/guitar
Mark Braby – drums

Except for:
The Subway Sect Trio gig in Sheffield with Vic/Mark/Kev.

Special Mention for Unexpected VSG Joe McKechnie who stepped in on drums for a gig at Williamson Tunnels Liverpool http://www.thepassage.co.uk/history/

VSG's Myers and Paul C's first two gigs with the Sect, they'd agreed to do a selection of live dates (Oct 2011-Dec 2013) while recording 1979 NOW!, giving the Sect the Professional touch!

The two gigs in Catalonia with Mark B on drums, Yusuf on guitar and with very Special Guest Sect returnee Trigger, on bass

2014 line up –  a solid 5 piece emerges
Vic Godard on vocals/guitar
Ian Holford, Drum Yob of The Sexual Objects and Nectarine No 9, agreed to be the Sect's Very Special Guest Drummer. http://www.creepingbent.net/
Mark Braby, back on bass,
Kevin Younger on keyboard/guitar
Yusuf B’Layachi on guitar (until the end of the year when he went to live in Hamburg.)

Except for:
Reunion with 1981/2 The Subway Sect -
Chris Bostock - Bass
Rob Marche - Guitar
Sean McLusky - drums
and Special Guest Volker Janssen on piano for very special Club Left show at 100 Club in November 2014. The finale to the night was an impromptu Subway Sect performance of ‘Born To Be A Rebel’ - Vic, Mark B, Kevin Y and Yusuf B taking to the stage forgetting for a moment that they didn’t have a drummer! Fortuitously one Adam Walters was in the audience and became another Unexpected Special Guest on drums.

Except for blinder of a performance on drums by Paddy Pulzer at the Sect’s 1st gig of the year in Southend
and Simon Rivers enriching the line up at Koko in June.

2016 – So far sees another very Special Guest drummer coming aboard!


The line up remained-


for the first two gigs of 2016 and then a temporary fond farewell to Ian as he had other things needing his attention – Harry’s Field:  http://www.newforestcampsite.com/


And Dave Morgan (ATV, Weather Prophets, The Rockingbirds…..) joined up on drums. Dave made an impromptu appearance as Sect drummer in 2011 on Pay the Rate, while waiting for Mark Braby to arrive. Dave also played at the Garage Islington in 1996 with Vic (see below).


Another Club Left reprise at the Glasgow Jazz Festival in June saw the 81/82 line up of
Chris Bostock - Bass
Rob Marche - Guitar
Sean McLusky - drums
get back together with Very Special Guest Pete Saunders on piano.

Other groups Vic has sung live with

Vic also did several gigs playing guitar with The Long Decline in the mid 1990's.

Further info on other groups and musicians Vic has played with at: www.vicgodard.co.uk