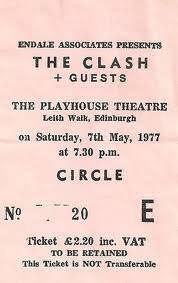 39 years ago the Subway Sect performed in Scotland on the White Riot tour and to quote Davy Henderson “things changed forever, baby”. The effect Sect principal Vic Godard has had on Scottish lit.pop has resonated ever since, as evidenced by his recording associations with Scottish independent labels Postcard and Creeping Bent.


But first, let’s go back, way back to May 1977 when the White Riot tour rolled into Scotland. The teenage punk cognoscenti in the audience were so enamoured by the Subway Sect’s grey treble glare and literary aspirations, that the prime movers went on to form the labels (Fast Product & Postcard) and groups (Scars, Fire Engines, Josef K, Orange Juice) that became known as ‘the Sound of Young Scotland’.

In 1978 Subway Sect went on to play at Clouds Edinburgh on 20 March, a date on The Great Unknowns Tour and three dates in Scotland supporting the Buzzcock's, 21 October Apollo Glasgow, 22 October  Capital Aberdeen and 23 October Odeon Edinburgh.

Moving on to 1980 when Postcard’s Alan Horne bootlegged the Subway Sect’s performance in London at the Music Machine, he set in motion a chain that could be said to link Scottish independent pop music from 1980 to the present. Postcard’s Orange Juice worked up a cover version of an unreleased Sect song from Horne’s bootleg, a northern soul influenced number called Holiday Hymn. Orange Juice recorded Holiday Hymn on their 1981 John Peel session for BBC Radio 1, and the rest is history. The Subway Sect’s influence on Postcard and beyond is indelible and every generation of Scottish independent pop group since has carried a torch for the Sect with lineage stretching from Orange Juice to the Pastels to Belle & Sebastian to Franz Ferdinand (and all roads in between).

“things are tough, we can still picnic” 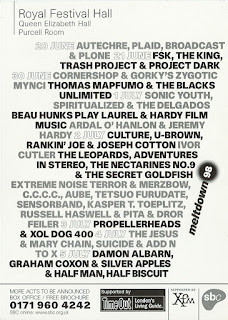 The Creeping Bent Organisation has worked with Vic Godard since 1998 when Vic appeared live with Adventures in Stereo at the Royal Festival Hall as part of an evening of Creeping Bent entertainment at John Peel’s Meltdown Festival. Vic has also worked with Creeping Bent artists such as The Leopards, The Secret Goldfish, The Nectarine No 9, Port Sulphur and continues to collaborate with the label. 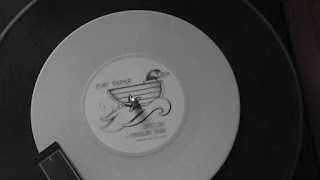 On the left, playing on our gramophone, is the double A side 7" white vinyl single released on Aktion und Spass with Port Sulphur's 'Discord / Finsbury Park' and Vic and Subway Sect's 'Stool Pigeon' from 1978 Now! on the other side.
Things are tough, but we can still picnic. www.creepingbent.net
http://www.aktionundspass.com/aufgeladenundbereit/index.html
Port Sulphur 'Fast Boys and Factory Girls' was recently played live for a Marc Riley session, not sure if still available to listen: http://www.bbc.co.uk/programmes/b0655czn
Vic's been collaborating with Davy Henderson and Port Sulphur on a song for the upcoming Port Sulphur LP (Creeping Bent) 'The Lane' and he recorded his contribution  when he was in Glasgow for Hot Fun in The Summertime / Creeping Bent Weekender at the CCA 25/26th June 2016.
http://www.creepingbent.net/ 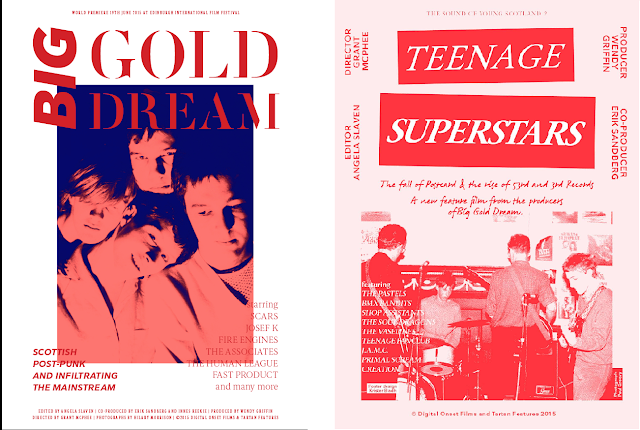 Vic was delighted to be interviewed to be in Grant McPhee's film Big Gold Dream: Scottish Post Punk. Since it's premiere at the Edinburgh International Film Festival in 2015 the film has gone from strength to strength, collecting accolades along the way. Read about the premiere and after party here, about half way down: http://vicgodardandsubwaysect.blogspot.co.uk/2015_06_01_archive.html
Exclusive Big Gold Dream promo footage in which Vic talks about The Clash's back drop and Schemies!


Post Punk Supergroup The Stool Pigeons - Vic Godard, Douglas MacIntyre, Malcolm Ross, Mick Slaven and Russell Burn made a huge impact on their debut at the Big Gold Dream EIFF after party, here covering The Fire Engines' 'Candyskin', filmed at the sound check.More about them later. 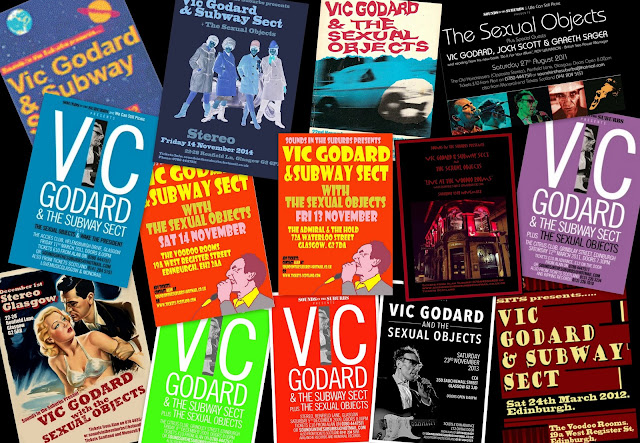 I recently happened upon the two films below of Brian Beadie interviewing Vic, filmed off the cuff by David Graham Scott on the Sunday of Vic.ism, in the vicinity of The Poetry Club Glasgow (hence the road noise!), they're both highly entertaining and informative. 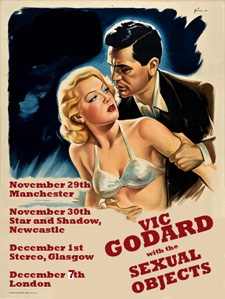 01/12/2012 Sounds in the Suburbs Presents Vic Godard & Subway Sect & The Sexual Objects at Stereo Glasgow.
Another iconic poster designed by that talented Mr A P Shaw.

Below is one from the soundcheck that Vic and the SOBs didn't have time to do in the set, cover of 'She's My Best Friend'.

13/14th November - Vic & Subway Sect were back in Glasgow on 13th November at The Admiral & Edinburgh with The Sexual Objects for the annual lovefest, always bodacious (sorry for the Snoopism) events and then Vic and the Sect headed further north for Andy Wood's Cool Cat Club Special at Beat Generator LIVE! with Stoor.
One of Vic's newer songs 'Inertia' filmed at the Voodoo Rooms soundcheck. 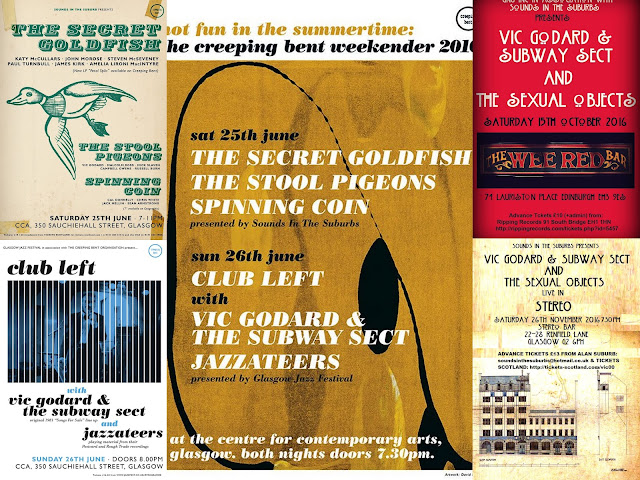 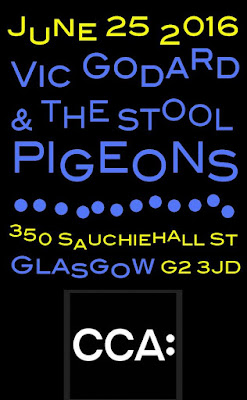 25th June CCA Glasgow Sounds in the Suburbs presents Hot Fun in the Summertime/Creeping Bent Weekender Night 1 with The Stool Pigeons, The Secret Goldfish & Spinning Coin. The Stool Pigeons made an even bigger impact on their second appearance, recording with them is on the cards. http://cca-glasgow.com/programme/573b20b8b9d2e1390e000001 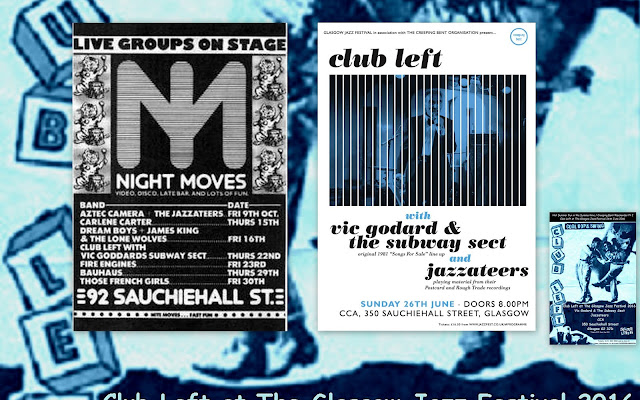 26th June Glasgow Jazz Festival presents Hot Fun in the Summertime/Creeping Bent Weekender Night 2, Club Left Reprise at the CCA with Vic & The Subway Sect, Sean McLusky, Chris Bostock, Rob Marche and special guest Pete Saunders on the ivories, The Jazzateers and Mairi Fenella bringing Cool, Bop and Swing to the CCA. The last time Vic & The Subway Sect played in Glasgow was at Night Moves 1981, posters for Glasgow 1981 and 2016 above (spelling right this time round!).

Read more The Stool Pigeons and Club Left at the CCA with The Subway Sect in Gnu's blog (after the politics in Summertime section):
http://vicgodardandsubwaysect.blogspot.co.uk/2016/07/what-on-earth-is-going-on-after-recent.html
and this is a selection of Gnu's videos from the two nights. 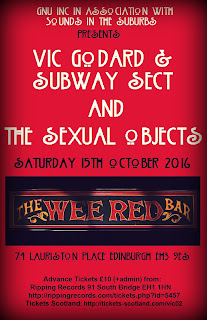 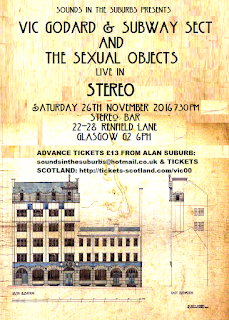 26th November and the last Subway Sect gig of 2016 - Sounds in the Suburbs Sect/SOBs Special at Stereo Glasgow. Tickets from Alan: sounsinthesuburbs@hotmail.co.uk and Tickets Scotland:
http://tickets-scotland.com/vic00

Thanks to Tracey Holloway and Lee McFadden for the videos.

Then there is Vic & Edwyn Collins

1994 T In The Park Glasgow Green with Edwyn Collins

15th October Gnu Inc in association with Sounds in the Suburbs and Murray Ramone Vic and Subway Sect and The Sexual Objects
26th November - SITS Presents Sect/SOBs at Stereo
To Be Continued.........and added to at length.

Monday 14th September and Forever Heavenly presented An Evening With Jock Scot, a night celebrating the work of  a "Musselburgh Superstar“ (Irvine Welsh) including the Forever Heavenly re-issue of My Personal Culloden. Jock in conversation with Robert Rubbish, the director of the soon to be released documentary Jock Scot: Services To Rock ’N’ Roll, followed by Jock reading a fine selection of his poetry, set to music by Davy Henderson and played by Davy and the other Nectarine No 9/SOBS Douglas MacIntyre, Graham Wann, Ian Holford and Simon Smeeton, backing vocals by The Scot Sisters.

What a heavenly, heartwarming, intimate, memorable night with a clutch of some of my very favourite human beings all squeezed together sharing a rare, very special experience and will be my lasting memory of Jock.
The Quietus got a chance to have a 'A Long Lunch with Jock Scot, Robert Rubbish & Lias Saoudi' in 2015
http://thequietus.com/articles/18577-jock-scot-robert-rubbish-lias-saoudi-interview