Gert's reaction: thatcher's gone but as we've still got cameron et al not celebrating yet. up the revolution! and on to other things-


'LIVE IN STEREO TOO' Vic Godard & The Sexual Objects

‘Live in Stereo Too’ Recorded & Produced by Murray Robertson with Live Sound by Shona Marshall at ‘Sounds in The Suburbs Presents ‘Vic Godard and The Sexual Objects’ @ Stereo Glasgow 1st December 2012, one of four special live collaborations in 2012 featuring Vic and The S.O.B.s. 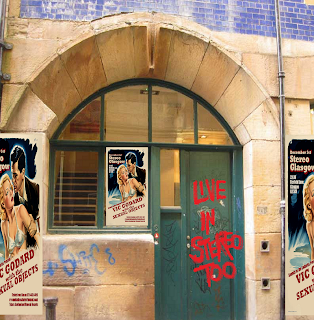 Read  about it here at 'Caught By the River' by Kevin Pearce-
http://www.caughtbytheriver.net/2012/11/vic-ism-a-celebration-of-vic-godard-subway-sect/ 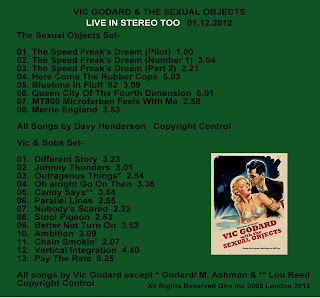 Putting Live in Stereo together was a wholly enjoyable experience and brought it all back to mind of how good these few gigs were. Thanks go to Murray & Shona for getting such a great sound and to Andrew Shaw for letting Ergon Ani use his iconic poster design for the cover.
Videos of all four events courtesy of Lee McFadden & Tracey Holloway on Youtube. This is Johnny Thunders filmed by Tracey.


Background- Vic has been making friends in Scotland for 35 years- he has recording associations with Scottish independent labels Postcard and Creeping Bent and over the years has worked with Edwyn Collins, The Leopards, Adventures in Stereo, The Secret Goldfish, The Nectarine No9, Bricolage, Shock and Awe and more. ‘Love’s Rebellious Joy-A Tribute to Paul Reekie’ with the Sexual Objects, Russell Burn sitting in for Ian Holford on drums and Gareth Sager adding some extra guitar magic.
http://www.theskinny.co.uk/books/features/102440-loves_rebellious_joy_tribute_paul_reekie
It all came full circle in 2012 with Vic.ism, the highlights of which were Vic ‘Singing with The Sexual Objects’. And there’s more in 2013 with a visit to Mono Glasgow on 20.04 to play an acoustic set with Davy, Douglas and Simon for Record Store Day (release date for Caught in Midstream) -
https://www.facebook.com/events/440141992738875/
Glasgow Jazz Festival on 27.06 as guest at the Jazzateers show at Stereo with Andy Alston, Mick Slaven, Campbell Owens, James K and Douglas mcIntyre-
http://www.jazzfest.co.uk/programme/jazzateers/
And Neu! Reekie! Edinburgh 28.06 with Douglas, & Sounds in the Suburbs gigs 22/23 November for more singing with all the Sexual Objects.

Photographs by Alistair McKay and Dean Taylor
* Didn't think I would be announcing ANOTHER release so soon after the Vic to Vic 7" and the Aed Caught in Midstream 7" (see earlier blogs) but there was delight all round when the latest Gnu Inc Limited Edition CD arrived unexpectedly early, big up to A1 in Acton ( not a road) for speedy delivery. UNfortunately gnu error negated the unfettered joy and release was postponed until 5th April but was available in time for the Sect's 2nd gig of a limited number they are doing in 2013,  the very enjoyable Spinning Chilli Presents Vic Godard and the (6) piece Subway Sect at the Green Door Store
With the pithy and entertaining Asbo Derek on board it was a memorable night.

The SEVEN piece Sect made their debut at the first gig of 2013 for Symptomatic Presents at the Water Rats Kings Cross, another great night and we got Jock Scot doing us an advert as well. Jock's intro filmed by Tracey Holloway and Parallel Lines by Lee Mcfadden-


http://www.youtube.com/watch?v=dCV_GsSX0rQ
And making up the 7 piece were Yusuf B'layachi and David 'Flash' Wright.on sax. You Bring Out the Demon in Me filmed by Lee-

Have a listen to the single on soundcloud-
https://soundcloud.com/aedrecords/sets/caught-in-midstream-vic-godard