To Be Eeyore Or Not To Be? Bit random at this time of year  whether it's Eeyore or Gnu that wins out so what's to come is laced with the odd idiosyncratic doobries and doodahs here and there (and the odd bit of skittishness, all may not be as it seems!). Nothing out of the ordinary there then Sidney.
http://www.just-pooh.com/shepard.html 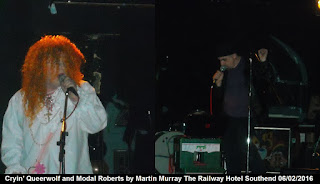 BIG UP to Gary Smith and Gettitude Promotions for putting on another memorable night of eclectic, joyful entertainment at The Railway Hotel Southend-on-Sea on Saturday (6th February) with Vic & Subway Sect's Mark Braby, Kevin Younger and Drum Yob Ian Holford kicking off the Sect Live in 2016 in style PLUS Modal Roberts PLUS The Get, Gary, Bruce Gordon, Kev Daintree Paul Brown and Jon Smith PLUS the inimitable Cryin' Queerwolf accompanied by The Get's Bruce Gordon and Kev Daintree with Ramjet Steve on percussion. And a Big Big Up to everyone who braved the gale battering Southend to be there!
The Get: https://www.facebook.com/groups/118148168208793/?fref=ts
Modal Roberts: http://www.modalroberts.net/
Cryin' Queerwolf: https://www.facebook.com/Cryin-Queerwolf-459134494109386/?fref=ts
http://www.railwayhotelsouthend.co.uk/

Running a bit late so Vic didn't have time to do 'Southend' this year however the audio CD of 'Southend' guaranteed for all advance ticket holders was some consolation and went down a treat, the ramshackle, impromptu, off the cuff 'Southend' version of 'Blackpool', recorded in 2015  by Giaco for Southend Sites. http://www.southend-sites.co.uk/index.htm 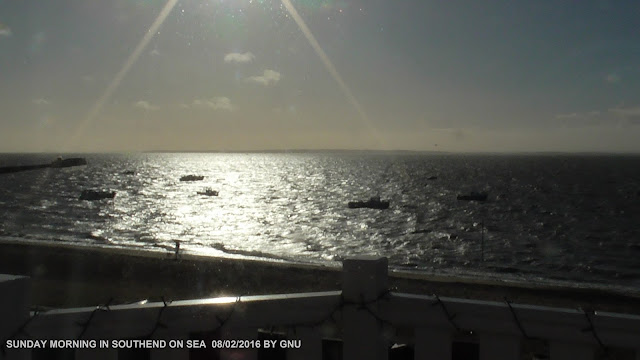 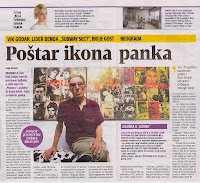 It has suddenly occurred to me (duh) that it is VicLeka that has been attracting the Russian readership, Russian and Serbian both being Slavic languages with Cyrillic alphabets. So if there are any wealthy Russian art lovers out there............
http://www.vicgodard.co.uk/vicleka.html
http://vicgodardandsubwaysect.blogspot.co.uk/p/blog-page_93.html 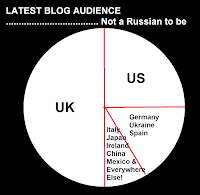 Vic's in some interesting and illustrious company here in Telegraph Culture Editor Martin Chilton's article featuring 20 famous people who have been postmen: http://www.telegraph.co.uk/books/authors/20-famous-people-who-have-been-postmen/ 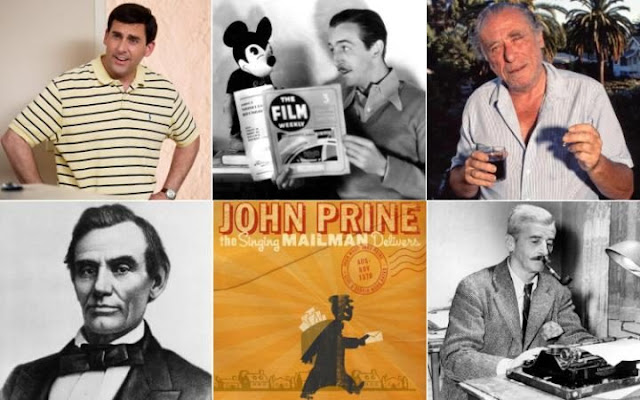 Working on the song book, a lot to consider apart from collecting the lyrics and the notes there's all the nitty gritty to tackle - layout for example, now I
was going to bore you rigid with the various layouts we've tried however have decided not to and I have deleted the 20 lines of those detailed layout options and I'll just leave at 'we're progressing, slowly!' 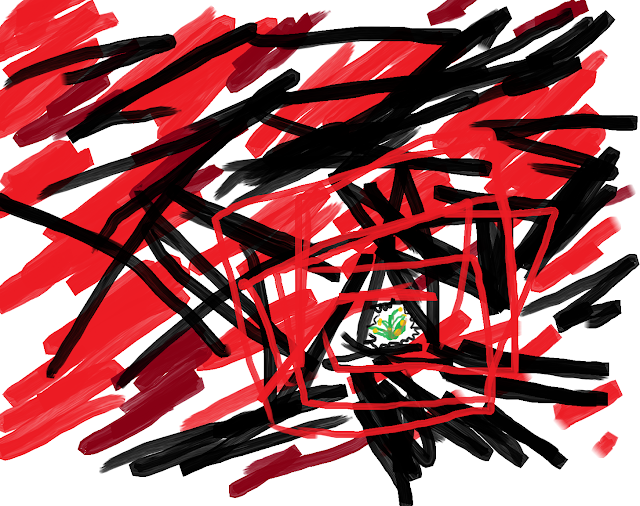 Vic's in the studio this month to record 'I'll Find Out Over Time' and 'Dead Dreamy' for a 7", not sure when to release yet, lead in time quite lengthy at the moment, one place was quoting 24 weeks on its website! Almost certainly something to do with Record Store Day, Saturday 16th April which happens to coincide with Vic and the Sect's return to Birmingham for...... 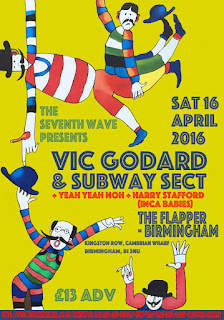 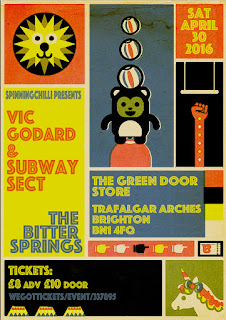 
Special Treat - Vic's going to do a couple of songs with the Springs from  the old Springs Sect live set.


Stuart Murdoch talking in 2013 in The Guardian about the Belle and Sebastian curated Bowlie Weekender at Pontins Camber Sands 23-25 April 1999:
http://www.theguardian.com/music/2013/nov/28/all-tomorrows-parties-festival-belle-and-sebastian 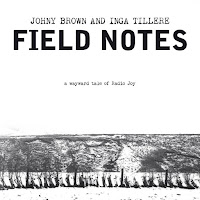 AND you can pre-order Johnny Brown and Inga Tillere's book Field Notes - "A selection of journal entries and radio plays that contributed to a pirate radio station project whose focus was the North Sea but whose span somehow reached most parts of the planet, a wayward tale if you like, of Radio Joy and the Drunken Boat".
https://bandofholyjoy.bandcamp.com/merch/field-notes-by-johny-brown-and-inga-tillere-book

AND just confirmed 14th October 2016 - Children of Godard with Band of Holy Joy in Newcastle,very pleased to be going back to the Cumberland, memorable night in 2015. NW gig to be confirmed 15th October.


The Eeyore Effect - I put it down to being a depth of winter baby, Wednesday's child and February often being a particularly miserable month weather wise (somewhat belied by the February photographs!). Roll on April. 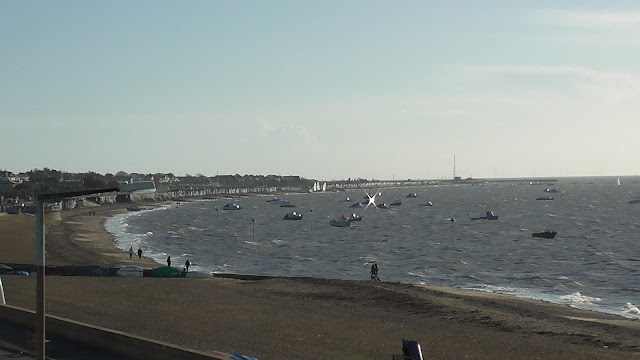 OR 'Come Fly With Me?

I'm half way through this fascinating account of the author's global journey in the footsteps of the forgotten 19th century explorer Thomas Machell. The illustrated  journals, now in the British Library, of Victorian traveller Thomas Machell are the inspiration that set Jenny Balfour Read on her quest and she finds her life to have striking echoes of his, not least in their travels to and within India, a career in indigo, and a passion for journal writing.
http://medinapublishing.com/deeperthanindigo/category/landingpage/

L'Essai Sur Le Parasitisme et La Paresse (A Treatise on Liggery and Laziness) - Henri Alaric de Nuphe (Pierre Gallimard Paris 1884) Who knew the problem of liggery has been about so long? Some interesting tips on what to do if you come across those who take advantage of the generosity and hospitality of others! You could try Abe Books: http://www.abebooks.com


As far back as I can remember I have wondered who the ubiquitous 'they' are who oft quoted as the unquestioned arbiters of all things. For example 'They'* say that imitation is the sincerest form of flattery (is it, is it really? Another thing I've mused on from time to time). I have asked people who have quoted the 'they' as a primary source who 'They' actually are but to date no satisfactory answer has been forthcoming. For some reason this puts me in mind of this somewhat creepy little poem: https://www.poets.org/poetsorg/poem/antigonish-i-met-man-who-wasnt-there

Yesterday, upon the stair,
I met a man who wasn’t there
He wasn’t there again today
I wish, I wish he’d go away...

When I came home last night at three
The man was waiting there for me
But when I looked around the hall
I couldn’t see him there at all!
Go away, go away, don’t you come back any more!
Go away, go away, and please don’t slam the door... (slam!)

Last night I saw upon the stair
A little man who wasn’t there
He wasn’t there again today
Oh, how I wish he’d go away...


* It turns out it isn't a 'They' at all who claimed that 'Imitaion is the sincerest form of flattery', it was a he, Charles Caleb Colton 1780-1832, a vicar in Kew amongst other things. Lacon, Or, Many Things in a Few Words: Addressed to Those who Think  http://www.biographies.net/people//en/charles_caleb_colton


This is hilarious - Johnny Thunders 'interviewed' by David Johansen about his upcoming tour with the Sex Pistols in the UK 1976:

And this documentary series might be worth a gander -
Velvet Underground, The N Y Dolls, CBGBs & The NY Punk Revolution, Part 1 of 5:
https://www.youtube.com/watch?v=8u0G2SyCJkw&feature=youtu.be

Edwyn Collins at The Roundhouse 29/01/2016 - the purity and clarity of Edwyn's voice soared over and above the rubbish sound, I could have listened to him singing all night. 'Girl Like You': https://www.youtube.com/watch?v=KfnrKBPLRI8
http://www.theupcoming.co.uk/2016/02/01/edwyn-collins-at-the-roundhouse-live-review/
http://www.roundhouse.org.uk/blog/2016/01/in-pictures-edwyn-collins-at-in-the-round/

By popular demand Joe McKechnie has re-uploaded his DJ mix from the Subway Sect gig at The Williamson Tunnels Liverpool 15/09/2011.


And not so much opium as methamphetamine -

The Mad Hatties Show on Scotland 69am:
http://scotland69am.com/

The Lee & Dave Travesty Show presented by Dave Smith and Lee McFadden every fortnight on Croydon Radio. A podcast of their latest show (#12) with Special Guest Spizz Energi is available to listen to and download: http://www.croydonradio.com/podcast/show.php?HistoryID=2ce9aed6-0170-3dcf-6d9f-7c82071be77c


One of the first proper gigs I went to, Hammersmith Odeon 1973 and yes, it made quite an impact on me, although my actual memories of the occasion are somewhat blurred by time.

These are all worth a read from Get In To This however Bernie Connor's 'His name Was always Buddy' tells us the touching and very personal way in which Bowie affected him and how that continues to resonate, 2nd one down, hankies at the ready.
http://www.getintothis.co.uk/2016/01/david-bowies-golden-years-getintothis-staff-share-their-personal-reflections-on-his-life-and-work/


Let All The Children Boogie, in which Neil Cooper sets out to work out what Bowie meant to him, if anything, and succeeds in a lucid and beautiful piece of writing.
http://www.productmagazine.co.uk/music/let-all-the-children-boogie/
SOUL LOVE

Vic talks to World of Hoopla's Martyn Smith about the time he met David Bowie (amongst other things) http://worldofhoopla.com/vic-godard/ 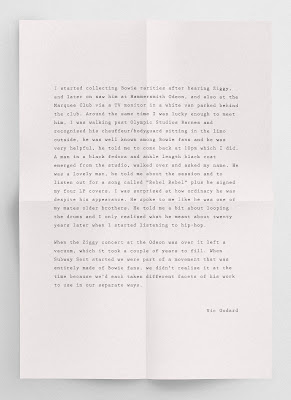 * Bringing this section to a close with three hours and 46 minutes of pure joy with Bernie Connor's 'Loving The Alien: Fresh Garbage Loves David Bowie', originally streamed live from Buyers Club Liverpool on 17th January. Feel and Spread The Love.


Loving The Alien: Fresh Garbage Loves David Bowie by The Sound Of Music on Mixcloud
All for now, leaving you with a bit of psychedelic Sammy Davis Jnr, à bientôt mes petits chou-fleurs!