Gnu here, Gert's let me temporarily Take Over the blog while she's taking a break, so hope it doesn't Derail Your Senses or Make Me Sad and end up an Empty Shell...... but I Won't Turn Back until The Writer's Slumped.

As no recording on the horizon for 1979 Now in September and no gigs Vic and I decided to have a couple of Napper days on the South Coast. Vic suggested Camber Sands and I said Oh alright Go On Then, hoping for a Trouble free stay and that it wouldn't result in Malicious Love.

The whole area has a surreal natural/unnatural beauty made up of a Site of Special Scientific Interest which includes Dungeness, Romney Marsh and Rye Bay, Rye Harbour Nature Reserve and Rye golf course. The first golf competition took  place in 1894 and demonstrating a notably rare and early bit of feminism within the golfing fraternity the club welcomed female members right from the start.  http://www.ryegolfclub.co.uk/  , so  bird watchers, walkers, dog or other and all golfers all taken care of.

There is a really quite eerie vibe about the place (cue Music of a Werewolf) -  the tide sometimes goes out a mile, the sea is striped and there's some weird and wonderful skies, possibly the combination of topography, geography, wind farms and nuclear power stations.The fortifications at the River Rother estuary entrance (try saying that after a few) to Rye Harbour are at one end of Camber Sands, the defenses built during the Napoleonic Wars as was the Martello Tower now a kilometre inland. Dungeness Power Stations are at the other end of the very long windswept beach bounded by a mountain range of sand dunes and it is visually very striking, in a brutalist/end of the world kind of way, set on the shingle beside the sea, juxtaposed as it is with lighthouses old and new and fishing shacks, most long since turned into bijou residences, metres away and literally in it's shadow. (Derek Jarman lived in one, famous for it's garden, him being a well respected gardener as well as a film director)

http://www.gardenvisit.com/garden/derek_jarman_garden_prospect_cottage_dungeness
http://www.sssi.naturalengland.org.uk/Special/sssi/unitlist.cfm?sssi_id=2000533
http://news.bbc.co.uk/local/kent/hi/people_and_places/nature/newsid_8478000/8478420.stm
Took the camcorder to get some practise in, not any actual obvious improvements in technique but in mitigation I was fighting the elements. First up is from entrance to Rye Harbour and over the golf course. Vic makes a couple of guest appearances. Can you make out what he says at the end of this one?

Imbalance/deck of a pitching ship special effect courtesy of the wind.It was very, very windy...


The upside of the inclement weather- extraordinary clouds galore, this doesn't really do them justice-

We dodged some rain with a ride on the Romney, Hythe & Dymchurch Railway, mostly rattling along behind back fences, occasional glimpses of the sea. No mention of Dungeness even though  train sets off right next to the power station. Signs all over telling you what to do in the event of a nuclear accident - well that close and it's simple-hope for some Ice on the Volcano ....or die. In Hythe.I unfortunately stopped filming at the wrong moment (below) and missed That Train on the left coming back past us the other way.  http://www.rhdr.org.uk/about.html

Stayed at The Gallivant Hotel in Camber, the beach just over the road and through the famous sand dunes. The hotel started out as a motel a couple of decades ago and the L-shaped layout hasn't changed but all ghosts of any dingy/Bates Motel connotations anyone may have about motels have been well and truly exorcised. Dog/child friendly and 5 of the rooms have their own direct access. Very accommodating and friendly staff. We had large, comfy room and it was very peaceful while we were there but it was mid week, the schools had gone back and the weather had changed, could have been a Different Story, this is a very busy area generally when the sun shines. The Gallivant's Beach Bistro menu was one of the deciding factors for choosing this hotel and we weren't disappointed. Unsurprisingly fish figures prominently, the Rye Bay plaice was particularly tasty and the puddings are good too. Definitely worth a visit.  http://thebeachbistro.com/

Both Vic & I have childhood memories of the area-

Mine are of family days out to vast, windswept beaches, picnics in the car while outside the wind whipped up the sand . Numbers varied from seven plus dog to four plus dogs but mayhem always ensued with my mother making the usual Same Mistakes in vainly attempting to control us all with a rolled up newspaper, both it and my mother's temper shredded well before we ran out of steam. 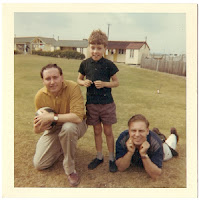 Throughout his childhood Vic spent many an enjoyable summer holiday at Littlestone Holiday Camp with his family, given the freedom to roam at will, exploring on his bike, playing Crazy Crazy golf, Nobody's Scared for his welfare. Sadly now replaced by a fairly grim looking caravan park. Vic remarks here on one particular event-

''A memorable year was '62 when the famous double winning Spurs team* came down to play against the holidaymakers.My  dad played and managed to get his collar-bone broken in an aerial challenge.Probably that Dave Mackay -he always was a brute.So that day ended in Folkestone General.''

* For those not in to football - 'Double winning' - League and FA Cup; Spurs - Tottenham Hotspur FC.

Vic/Sect/Sobs/ News......and 30 Odd Years
Website news- 'Sansend' and '1978 Now' downloads went live on the website  and  T Shirts are much easier to get hold of with a buy now button, all thanks to Mr A Shaw. http://www.vicgodard.co.uk/t_shirts.html

November is going to be a bit of a frantic old month, apart from 30 Odd Years there's the two Subway Sect gigs in Hamburg on 8th/9th only a few weeks away, rehearsals under way. The great Martin Soulstew is the very special guest on both nights. https://soundcloud.com/martin_at_soulstew
Then it's Scotland!  Sounds in the Suburbs The Sexual Objects What's the Matter Boy on 22nd/23rd at the Voodoo Rooms Edinburgh and CCA Glasgow.
The next weekend 29th/30th it's 2 of the last four Subway Sect Specials 2013 at The Star and Shadow Newcastle ***UPDATE 11/10/2013-  Déjà Vu- Due to the unforeseen the Hebden Bridge gig is cancelled.then on to Hebdon Bridge Trades Club with The Hamsters and Andy T.
Last 2 are the Christmas Specials with Asbo Derek on 13th/14th December  for Spinning Chilli Presents Brighton and Symptomatic Presents London. (First delivery of sweeties arrived!)
For details and ticket info for all gigs see last blog or www.vicgodard.co.uk  or https://www.facebook.com/vic.godard.3 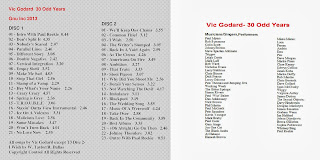 Vic Godard - 30 Odd Years Update: After getting the 2 CD project off the ground with a rush of enthusiasm last month and really enjoying compiling the track listing, quite a trip down memory lane (now complete, though this isn't the cover, just working copy), the full enormity of the task began to sink in and brought the mood down a tad. There was so much to do so I made a list, a boon for organisation but bad for morale- mastering; choose packaging; cover design; artwork; notes; booklet; compiling- contributors, musicians/singers; producers,engineers, recorders,audio experts; credits for  artwork, photographs,notes; distribution; promotion, etc............. 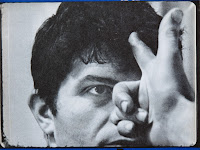 PANIC sets in-after a few days of manic activity with very little to show for it, I started unconsciously referring to it as 90 Odd Years (think Vic thought this was some veiled subconscious personal allusion). Acceptance that I did not have all the requisite skills necessary to do 300 Odd Years proud did not immediately make the situation any better so had a couple of head in sand days. Upon sticking the horns above the hedge line, it was not hunters of the lesser spotted gnu appearing over the horizon but knights in shining armour so many thanks and gratitude to Andrew, Mike, Michael and Lee (the watchful eye). I believe  this really is going to be the Best Album covering Vic's musical career fairly comprehensively, although I could easily have filled at least one other CD and what would have been ideal would be to have had a 'live' companion piece and a DVD. Maybe for 40 Odd Years.

1979 Now Update - I Wish there was but Back In A Void Again on that one. (Not as doom laden as that, Vic should be back in the studio very soon)

Obscure Vic Facts - No 1
What is Vic's connection with Brian Davison?  Answers to https://www.facebook.com/vic.godard.3  Small gnu gift to first person to get it.

Looks like 2014 is going to be a busy one both releases and gig wise, not usually sorting  dates this early except for the odd one here and there and already got some Subway Sect ones booked and quite a few enquiries. I think it's karmic - Vic was hoping to play some of the places he hasn't visited in a while or not at all and hey presto it seems to be happening. He's been going on about a gig in Stoke and it now looks on the cards. (Personally think Homes Under The Hammer has been having a subliminal effect, so Derby could be next)

Blackpool August- Well, had to, gnu inc are doing a 7" of Blackpool next year and if the Sect are in similar company to this year's Bizarre Bazaar stage should be a goodie. http://www.rebellionfestivals.com/
Blackpool video courtesy of Andrew Paul Shaw. 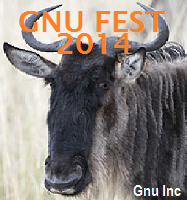 Fantasy Gnu Fest 2014 -
I've been day dreaming about a Gnu Fest to complement 30 Odd Years, one of those 'if money were no object' things. It would be an all-dayer not just music but art/literature/comedy and with everyone having a Vic link. I'd have two stages, one for poets, writers, comedy, acoustic and jazz and the other for everyone else. (It would also have proper loos, proper paths and a giant retractable roof- well, it is a fantasy) My current line up is, in no particular order:

We haven't been to the flics as a couple for aeons ( we both agree it was 'American Werewolf In London' in Manchester late 1981) so it was a real treat that for our re-introduction to the delights of the silver screen we were invited to the full on London premiere- blue red carpet, paparazzi, some unidentifiable sparkly clad faux celebs, flashing bulbs, the whole caboodle (ooh er get her) of 'Filth', the latest of Irvine Welsh's books to be brought to the screen, with a plethora of talent making this an ensemble piece. I've read the book and couldn't imagine how  it could be adapted for the screen, also fairly sure I wouldn't want to put myself through watching it if it was, so Respect to Jon S. Baird for direction and a screenplay that captures and delivers the essence of the full on visceral mental disintegration of Irvine's book and stands as it's own entity. Apart from the mesmerising performance by James McAvoy, Shirley Henderson and Eddie Marsan stood out for me, the only obviously sympathetic characters. There's a brilliant Mr Marsan moment where the audience involuntarily goes from gagging to laughing out loud in the same breath. I wonder how many takes it took? Any way one of the funniest moments of the film and there are quite a few, mostly on the darker side of humour. I really enjoyed it and Vic surprised himself by liking it a lot too. http://www.filthmovie.co.uk/
PS My one quibble is Mr McAvoy's prolific pearlies- far too pristine.

Stripes Brentford with the Bitter Springs - this is the record over the live. 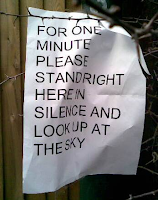 Seems fitting to end on the news that YHO #50 is the very last FINAL issue of Your Heart Out from Kevin Pearce
''The fiftieth and final issue of YHO is about listening.  It is illustrated using examples of records which have become life-supports between and during YHO explorations.  These might include ones by Pinch, Pursuit Grooves, Photek, Cyrus, Sherwood, Shackleton and Smith & Mighty, but that’s not really the point.''
As always FREE to download for ALL- http://yrheartout.blogspot.co.uk/2013/10/yho50.html   (We'll always have the archive)


Hope I haven't left you with any long term side effects- Gnu out.